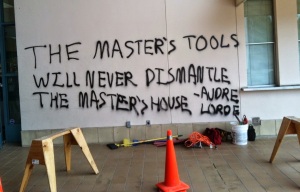 I teach writing for a living.

I didn’t start out that way, and I didn’t even really intend to teach writing, or at least not the way I ended up teaching it. I graduated with two degrees in literature and creative writing, with a focus on women and gender studies. If you look at my picture in the 1998 edition of “Best American High School Students,” with its purple eye shadow and Barbara Streisand in 1968 hair-do, it says I want to be an English professor.

A lot of people still erroneously call me an English professor, but I’m not. Despite my years reading and writing about imaginative literature, I stumbled, almost by accident, into Composition, and that’s where I stayed. Partly because that’s where I was needed, but mostly because it turned out, that’s what I do best. While I still love imaginative literature, I found, in the end, that the classroom mattered more to me when I used it as a vehicle to interrogate the American political and historical landscape, with an emphasis on feminism and civil rights. This was closely related to my student population, then– in 2009, until 2015, I was an adjunct, which meant I taught between 20-24 credits a semester, mostly at community colleges in southern New Jersey– Atlantic Cape and Cumberland County. The campuses were in uptown Atlantic City and rural Cape May County. My students were almost exclusively– and sometimes exclusively– low-income people of color, trying to balance work and school and, often, families. Many of my students were “non-traditional,” i.e., returning to school in adulthood. Many of them were women of color. Many of those women, upon reading bell hooks and Audre Lorde, would find me in the hallways after class, or the lounge, and tell me he hits me, or he hits the kids or sometimes I’m afraid he’ll kill me.

And then, usually, I’d say I was afraid he’d kill me, too.

Because in 2013-14, the year I taught the most courses I ever did– 53 credits– I was less than two full years out of a relationship with my son’s father, who had repeatedly endangered my life, and my son’s life, over the course of our two years together. He had cut me off from my family, and friends. We moved, at his behest, from New Jersey to Texas, in a whirlwind of drugs, theft, lies, and violence. The police were at my house repeatedly. My family, at a loss, stopped speaking to me. His family took us in, appeared to love us, appeared to care for us. Then, when he began to use Dilaudid, and I went to them, I discovered he had told them a carefully executed series of insane lies about me. He had repeated these lies to other people I was friendly with, in a state thousands of miles away from my home, that I had moved to barely six months ago. When I tried to leave, he stole my phone. And my car keys. And my wallet, which hardly mattered, since, after all, he had drained my bank accounts.

So, when I was having those hushed conversations in linoleum corridors, or classrooms with flickering lights, I was speaking with the authority of lived experience.

It was the same authority that informed my teaching, although I did not, then, describe my personal experience with violence, abuse, and absolute powerlessness; although I do, now, when teaching feminist theory, make the claim that feminism saved my life.

It’s not hyperbole. When I met my now-partner, Vincent, about four years ago, he was the exclusive single father of a five-year old daughter. He said What can I do? How do I raise her?

I said, Educate her. But then I shook my head, like I was trying to shake something loose. Because, after all, like most educators, I have a very expensive brain. At the end of my formal education, my parents, the US government, and myself had spent approximately $200K on my brain.

But I still ended up fleeing in secret, at the crack of dawn, Hank on my hip while his father was unconscious on the couch. I still cowered barefoot in the kitchen while he threatened me with a steaming pan of sauce I had been cooking all day. He still raped me.

So I said, Make her a feminist. Because feminism saved my life. When I was told by him, by my family, by family friends in public spaces, that I was a pathologically selfish, stupid, worthless fool, that I had never been in any good and would never be any good, feminism said Yes, you are, or at least, Yes, you can be. Feminism gave me a language to name the wrongs I had recognized my whole life, but which the world I lived in named as normal. No, that’s not it– they didn’t even name them as normal. They didn’t have to. It was just the world. It was just the way things are, have always been.

This is a hard essay to write. It’s a hard argument to make. It feels huge and amorphous. It feels like it’s been swirling over my head for years. Several years ago, someone I know, who I had watched, multiple times, go out of their way to humiliate servers at restaurants and bars, made a public statement on social media about the lack of indictment of Michael Brown’s killer, supporting it. They said I guess you were in the grand jury room… Another friend criticized this, and when he did, the originator of the post attacked him viciously, at which point, I did something probably ill-advised– I attacked the originator of the post. I said that I had stood by for too long while this person humiliated those in service to them, and that I wasn’t going to be quiet about it any longer. All of the anger I felt at  Michael Brown’s murder, and at both the originator of the post, and myself for saying nothing in defense of those he had humiliated in front of me, bubbled over.

Like I said at the outset of this post– I teach writing, not literature, but I am trained in so-called great literature, which is often mistakenly understood to be about action, when in fact it’s about character. Action derives from character in great literature, and not the other way around. Learning to teach writing, as opposed to literature, has been an interesting journey– in many ways, I’ve had to become a self-taught composition professor, had to school myself in rhetorical analysis. I’ve had to read endlessly about logical fallacies and argument, as this was not my university training. I learned about logos, pathos, ethos, kairos, mythos, slippery slopes, circular reasoning, straw men.

Or at least, I did the best I could. Because what I observed, over and again, was the reality that these are useful tools, but they are not, as they often painted to be, absolute truths. They are made things, constructions, like all human tools, but they are often spoken of as though they are organic materials– in the same way that Americans foolishly describe markets like they sprung into being like leaves from a tree, many of my friends and colleagues often talk about logic and reason like it’s as natural as breathing.

But it occurs to me that maybe we need a new logic. A new reason. Or at least, a new language to describe these things.

Audre Lorde wrote that “The master’s tools will never dismantle the master’s house.” These words seem more pressing than ever to me, today, living in America. I am seeing the argument that Nazis marching in front of synagogues and shouting “Sieg Heil!” is protected speech, but that we should prosecute people who, enraged, embodying lived experience, lived trauma, finally pull down a petty, artless rock celebrating a treasonous slave-owner. This argument is made in the name of reason, of law and order, of due process. But we live in a place where due process has historically failed Black Americans, indigenous Americans, immigrants, and women. Due process privileges logos above all things. But those people, pulling down that monument? They weren’t privileging anything. They were pathos embodied. They let their reality win out over the fallacy that due process will always work in the end. That law and order prevails. Because from my vantage point, those in favor of due process and law and order are, at this moment, defending Nazis and calling for the prosecution of human beings railing actively against the idea that an artless rock celebrating a treasonous slave-owner is more valuable, in this country, than the embodied experience of millions of Americans.

My co-editor, Jill, mentioned writing something for the blog as we moved into the fall semester. I thought about work; I thought about domestic labor; I thought about precarity. I wanted to write about all of these things. And maybe, in some way, I am– this feels like domestic labor. I am, after all, writing this from the safety of my bedroom, while my children play, safely, and Vincent plays the guitar.

But as I move toward another semester of teaching writing, rhetoric, reason, I am in a combative questioning with myself and my discipline– the discipline that, after all, houses enormous amounts of adjuncts, as Seth Kahn
describes. Much is made in rhetoric about “the performance of neutrality,” the idea that as teachers of critical writing, we should make a clear effort to be free of politics. But as adjuncts, we know how unbearably hard this can be. We know the ways the classroom fires to life when we name our realities, our lived experiences. The ways that naming can illuminate institutional and systemic oppression in a way few texts can. The way it lends us an authority that can change the direction of the classroom in extraordinary ways. Perhaps logic and reason dictate that we perform neutrality, that we say nothing about the system that we teach within, its appalling flaws. We don’t, then, only perform neutrality– we also enact a lie, pretend we are “the same” as full-time or tenured professors, when we know, in fact, how absurd that is. When we live it.

I don’t yet know what it is I’m saying. Perhaps I don’t yet have the language for it. But I am searching, and enacting the search in the language at my disposal. This is what I take into the fall semester. I hope I meet you there.

3 thoughts on “The Master’s Tools”