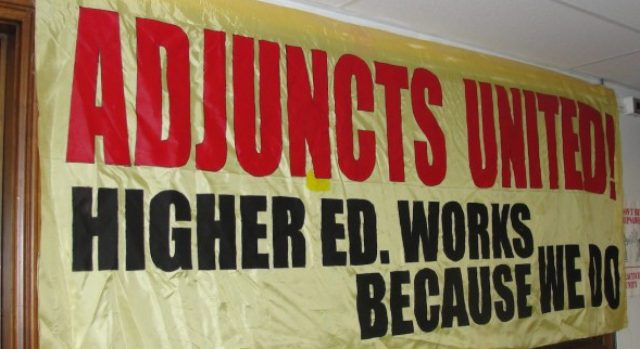 The past 25 years have transformed higher education. Most significantly, money is being funneled into administrative positions and away from tenure-line hires; this, combined with dramatic budget cuts for public, state-funded institutions, has led to most teaching positions being part-time and low-paid. According to a 2012 report from the American Association of University Professors, contingent faculty make up over 75% of all instructional staffing. In 1975, only 25% of faculty held contingent positions.

Among the most serious problems resulting from this condition is the relegation of part-time faculty members to the margins of academia, both logistically and culturally. Beyond the obvious side effects—less money, no healthcare, less ability to pay students the attention they both desire and deserve—is the constraints placed on their ability to address their own working conditions. Their marginalized positions limit their ability to participate in campus governance in truly transformative ways, and to address their experiences without fear of dismissal. Despite these risks, adjuncts remain the most active individuals addressing these institutional shifts. And while the culture of insularity and individualism challenges any attempts at solidarity building, and delegitimizes their concerns—especially when they take them into the public sphere—

adjuncts refuse to remain silent. The work, the experience, and the contributions of the precariat to scholarship, teaching, and service are often dismissed, mislabeled, misunderstood, or entirely ignored by their full-time colleagues, their workplaces, and the public-at-large. And yet, they persist.

In this book, the precariat speaks: their work, experiences, teaching, and scholarship are the center of this anthology. Within it, they argue that tenured faculty’s clinging to notions of “academic freedom”—the most common argument on behalf of the tenure-system remaining in place as-is—is an inadequate response to the crisis of precarity. Instead, they contend that battles fought over who is sufficiently recognized and compensated for knowledge production must be understood in light of economic systems of power and inequality that shape working conditions both domestically and globally, if they are ever to be transformed in favor of the worker. Based on multidisciplinary research, autobiographical accounts, and even performance scripts, this urgent analysis offers sobering insights into such varied manifestations of “the imperial university.”

The purpose of this book is to give serious scholarly attention to the complex and often highly controversial topic and experiences of those working precariously in the academy. It will address common misconceptions and will serve as a valuable resource for anyone trying to understand the effects of recent transformations in higher education. Since the problem of the precariat is global, contributions have been drawn from an international and interdisciplinary cohort of scholars working precariously in a

variety of institutional and academic settings. Five different countries are represented in this volume, either through the nationality of the authors, or the subjects of their chapters.

The 20 chapters of this book will cover a range of perspectives and are divided into four sections:

Introduction: What Is Precarity?:

The three chapters in the introduction approach and define precarity from a variety of disciplines and perspectives, attempting to wrest it back from administrators and tenured faculty, who too often get to define a concept and experience that is not theirs

This section focuses on how contingency shapes and changes the experience of teaching. Special consideration is given to the ways contingency, ironically, discourages active

discussion or analysis of the role pedagogy plays in the classroom, since the large course loads and low pay of most adjuncts often makes real pedagogical writing, and assessment, impossible. Also discussed are ways the outsider status of the contingent can create forms of activist pedagogy not traditionally held or practiced by academics with more stable positions.

The Affective and the Intimate:

This section explores the effects of contingency on one’s personal life, and includes, but is not limited to finances; mental, physical, and emotional health; family life, professional relationships, and their relationship with scholarly or creative work.

Paths Toward the Future: Precarious faculty in higher education occupy and perform a number of liminal spaces and roles; as Erik Strobl points out in his chapter in this section, adjuncting is “the only low-paying, high-prestige job in the United States.”
It is this paradox, Strobl argues, that partly accounts for the troubling lack of organizing
and agitating by adjunct and contingent faculty here, and abroad. The chapters in this section examine precarity from within, and higher education from the margins, and use this double lens to imagine new ways for organization and activism for faculty and students alike

2 thoughts on “About The Book”